The explosion of data generation has been accompanied by a corresponding explosion of memory storage technology options. The array of acronyms is astounding—NAND, DRAM, SRAM, MRAM, PCRAM—and finding the right option
can be complicated. For applications that need nonvolatile memory with high switching speed and fast data access, storage class memory (SCM) can be a
perfect fit.

Although SCM is an excellent solution, increasing the memory density for demanding applications can be tricky. Shrinking the cell size to increase density is impossible beyond a certain point because cell-to-cell thermal disturbances limit the cell pitch.

As noted in the first blog in the series, the tiger is revered as a ferocious hunter,
but is also inefficient (chase to catch ratio of 5%). As it matures with hunting experience, the tiger realizes it does no good to keep hunting in an area once the prey has scattered. The tiger needs to head off in a different direction to ensure its own sustainability. Regarding SCM design, we benefit from thinking vertically rather than horizontally. The answer to the density challenge lies in novel stacked 2D or 3D device architectures. With all novel technology, the yield ramp can be steep.

One configuration for a PCRAM cell sandwiches a layer of PCM and a selector device between two metal electrodes. The selector isolates the cell and provides input current for switching. An optimum cell design keeps the cross-sectional area low, thermally insulates the cell for more efficient heating, and tailors the PCM composition. All of these factors minimize the reset current, allowing for lower power consumption per cell so that more memory cells can be switched on at once without overloading the circuit.

Stacking two planar PCRAM cell arrays creates a 3D structure. This structure is used to make the 3D cross-point device, a commercial PCRAM product, and is considered state-of-the-art technology. It exhibits higher density than DRAM devices, with a reported switching speed 1000 times faster than NAND and endurance 100 to 10,000 times than that of NAND. 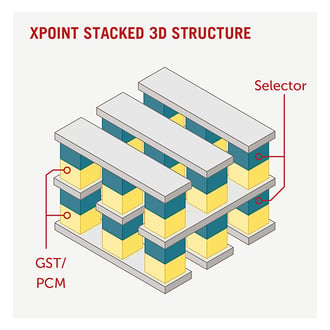 What if we could extend this stacking concept and stack multiple arrays of cells vertically? That seems like a simple way to increase memory storage capacity, but implementing it is far from simple. The 3D cross-point device is built sequentially layer by layer. Each layer requires lithography, etching, and sputtering. Stacking many layers in this manner would be extremely time-consuming and cost prohibitive. Overwhelmed with a similar complexity, the tiger may freeze and lose out on the prey.

We need to venture into somewhat unexplored territory. A true 3D structure would optimize the cost/performance tradeoffs and address the cost-of-ownership (CoO) gap if all layers could be manufactured in parallel. Vertical channels filled with PCM would create chains of cells in the vertical direction to enable higher-density PCRAM while reducing the number of processing steps. This approach creates the critical vertical structure in one processing set, saving time, and cost. As fantastic as this sounds, we must also identify the high-volume manufacturing yield hurdles. 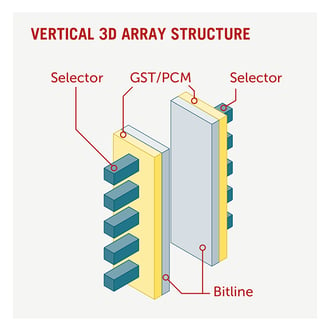 Such a structure was proposed as early as 2012, but commercial production remains elusive. Producing it with a high enough yield is a big challenge. The answer lies in creative thinking. We can borrow and combine several approaches.

The overall structure for a vertical PCM configuration is made in a similar fashion to today’s 3D NAND devices. It requires depositing a conformal, smooth, and dense PCM film on the vertical sidewalls. Metal organic chemical vapor deposition (MOCVD) can achieve the necessary high-quality conformal film, but only if the deposition temperature is below the crystallization temperature of the PCM materials, which is typically ~200°C (~392°F).

If you are hunting for a better solution for your high-density, nonvolatile memory,
we can help you find the best combination of materials and structures to meet your needs.

Inconsistent results and deviation are major issues in cell therapy manufacturing, primarily resulting from historically manual methods, scarcity of proprietary tools, and lack of operator training. With this difficult process also comes another hurdle–time. Providing a safe vein-to-vein transmission is critical when a patient is waiting (in many cases) for lifesaving therapy. How can we bridge the gap between speed, quality, safety, and consistency?

Within the life sciences industry, controlling biological and micro contaminants in process streams is vital to improving operating efficiency and the enablement of technological advances such as modern drug development and monoclonal antibodies (mAbs). Sterile filtration plays a critical role in protecting vital bioprocesses and is the cornerstone in eliminating contaminants. But what happens when a filter gets plugged and how can you minimize impact on filtration performance?

Entegris is proud to collaborate with Kuhner Shaker in the development of a 2500 L single-use bag that could exceed their complex requirements while meeting their production needs at scale. Delivering a reproducible product every time, with the ability for specialized applications across scales is what Entegris does best, and this joint effort is no exception. Kuhner evaluated several bag designs for robustness in their 30-day shaking process that were not able to meet the requirements. The Entegris design not only met the need for 30 days of use but was still going strong over 100 days of continuous use.