DRAM architecture has remained virtually unchanged for the past decade, with the dimensions shrinking proportionally with each successive device node. This linear path, however, is reaching its limits for nodes below 20 nanometers (nm) including 1x, 1y, 1z, 1a, and 1b. A major change will be needed soon if DRAM is to keep up with advances in logic.

DRAM lies near the top of the memory hierarchy pyramid1 where its proximity to the central processing unit (CPU) makes performance paramount. Unlike NAND, where cost-per-unit-cell drives innovation, fast switching speed must be prioritized. Scaling DRAM devices has, thus far, been accomplished much like scaling logic, where advances require shrinking the device dimensions rather than stacking vertical struc­tures as has occurred with non-volatile 3D NAND memory, Figure 1.

DRAM, which consists of a transistor and a capacitor, Figure 2, is a volatile memory, meaning that data is lost when power is shut off to the cell. For DRAM, the charge in the capacitor leaks away over time so the cells need to be charged every few milliseconds from a separate power source. In contrast, non-vola­tile memory relies on charge-trapping materials like silicon nitride or a confined conductor such as polysilicon to hold the charge within the cell. 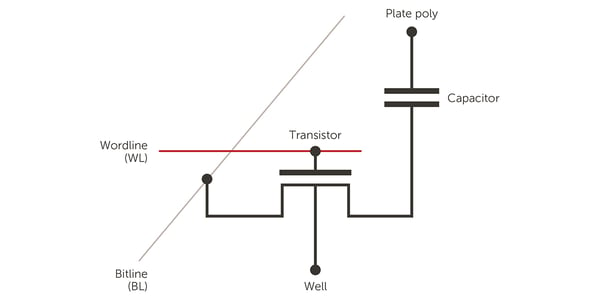 Next-generation DRAM cells will need new materials and architectures to address the challenges that device shrinking poses. As layer thickness or line width decreases below a threshold value, the electrical resistivity of metal lines increases dramatically and nonlinearly due to surface scattering, film roughness, and grain boundary defects.1 Tungsten (W) has thus far remained the standard choice, but new materials are now being evaluated to minimize the increase of effective resistance with shrinking dimensions. The capacitor will likely change from a cylinder type to pillar type, necessitating material property improvements.

The maximum allowed size of killer and latent defects reduces with each advancing node. Aggressive measures are needed to reduce the prevalence of these defects for 1x, 1y, and 1z devices. It is prudent for all advanced devices to have in place a filtration and purification strategy to avoid liquid and gas phase contamination entering the process materials.2

Metallic contamination related to chemical mechanical polishing (CMP) is especially critical for DRAM since CMP steps are occurring very close to the transistor. CMP of W at smaller dimensions needs sophisticated slurries that require post-CMP cleaning. Cleaning chemistries must be tailored to the CMP process for adequate residue removal.

DRAM manufacturers are working to develop structures that will accommodate the needs of the 1y, 1z, and 1a nodes and beyond. Such developments may involve changes in materials and processes but may also require innovative and disruptive solutions. Envisioned disruptive solutions either alter the DRAM architecture, (e.g., 3D transistor) or incorporate different memory technology into DRAM devices.

Several emerging memory technologies,3 including phase change memory (PCM) and multiple RAM variants are in various states of maturity and all have the advantage over DRAM of being non-volatile. But despite improvements in speed and endurance some have not succeeded in replacing DRAM due to high cost.4 However, given the industry trend to bring logic and memory closer together to improve latency and create memory cells that perform logic tasks, emerging memory technol­ogies may take hold.

DRAM fabrication will need to evolve to meet the demands of high-performance devices over the next few years. Next-generation DRAM cells will need new materials and architectures to address the challenges that device shrinking poses.

Inconsistent results and deviation are major issues in cell therapy manufacturing, primarily resulting from historically manual methods, scarcity of proprietary tools, and lack of operator training. With this difficult process also comes another hurdle–time. Providing a safe vein-to-vein transmission is critical when a patient is waiting (in many cases) for lifesaving therapy. How can we bridge the gap between speed, quality, safety, and consistency?

Within the life sciences industry, controlling biological and micro contaminants in process streams is vital to improving operating efficiency and the enablement of technological advances such as modern drug development and monoclonal antibodies (mAbs). Sterile filtration plays a critical role in protecting vital bioprocesses and is the cornerstone in eliminating contaminants. But what happens when a filter gets plugged and how can you minimize impact on filtration performance?

Entegris is proud to collaborate with Kuhner Shaker in the development of a 2500 L single-use bag that could exceed their complex requirements while meeting their production needs at scale. Delivering a reproducible product every time, with the ability for specialized applications across scales is what Entegris does best, and this joint effort is no exception. Kuhner evaluated several bag designs for robustness in their 30-day shaking process that were not able to meet the requirements. The Entegris design not only met the need for 30 days of use but was still going strong over 100 days of continuous use.