Like all reticles, those used for EUV lithography rely on reticle pods for safe storage and to protect them during lithographic patterning, inspection, cleaning, and repair.

All surfaces that contact or surround a reticle, includ­ing those of the pod, must remain ultraclean to avoid introducing contamination in the form of particles or airborne chemical vapors. The finer the lithographic patterns, the greater the risk reticle contamination poses. Potential contami­nation sources include both foreign particles and chemical residues. Reticle coatings are very delicate and easily damaged. Anything that touches a reticle, whether it is an expected part of the process such as a robot arm in the fab or an unexpected contaminant such as a human hair, has the potential to cause damage.

Today, the dual-pod configuration is standard practice for EUV lithography, and such pods are commercially available. Just because they are readily available, however, does not mean that they are a commodity product. EUV pod designs, Figure 1, continue to evolve to meet demands for performance and lithography throughput. 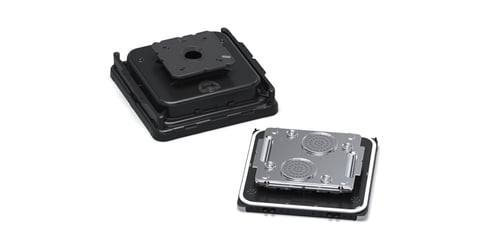 Despite the protection that the dual-pod configuration conveys, the potential for contamination is significant. For this reason, EUV pods must be developed with contamination risk mitigation in mind. Especially for reticles that do not include a pellicle, the inner pod is the primary source of both protection and potential contamination.

Pod design considerations cover both the geometry of the inner and outer pods and the materials from which they are made, including:

Because reticle pods are intended to last many years, they must meet the needs of current and future EUV lithography. Polymers that outgas create undesirable chemical contamination that can deposit on the reticle surface. Pod material should, therefore, be chosen to minimize the potential for outgassing.

Regular purging of the outer pod is required to remove moisture inside and maintain a clean, dry environment for the reticle. In an ideal design, the filter conductance — a measure of the ability for air to flow through the filter — should be much greater than the seal conductance, so that at least 90% of the air entering the inner pod enters through the filters.

Much of the lithographic process is automated and the expected long lifetime of pods means that they will experience thousands of open/close cycles over many years. Using materials that resist wear both minimizes particle contamination and extends the useful life of the pods.

Today’s pod designers should also consider a version that includes space to accommo­date a pellicle as well as a version for use without a pellicle. Designing a pellicle-compatible pod requires close collaboration between the pod manufacturer, pellicle supplier, and lithography tool manufacturer.

EUV reticle pods are highly specialized pieces of equipment that fulfill a critical role in EUV lithography. They must protect the reticle during use, storage, and transportation while not introducing additional contamination or damage. Pods must be compatible with lithography equipment and be able to maintain a clean, dry atmosphere for the reticle. Precisely designed dual-pod configurations achieve these goals for reticles both with and without pellicles, ensuring the future of EUV lithography.

Entegris is proud to announce a new relationship with Farrar Scientific, by Trane Technologies – a global climate innovator. Farrar offers best-in-class operating systems for ultra-cold temperature storage and controlled rate freeze/thaw chambers for pharmaceutical, biotech, and biorepository applications. Entegris offers the best-in-class Aramus™ bag for robust cold storage and transport. Collaborating with Farrar enables Entegris to offer a combined solution that accelerates the freeze/thaw process. Powered by Trane Technologies, Farrar’s solutions fill an unmet need for large pharmaceutical and biopharmaceutical customers requiring flexible, modular, and efficient ultra-low temperature freeze/thaw processing, as well as -80°C (-112°F) bulk storage reach-ins and -70°C (-94°F) pallet chambers. Farrar’s offerings and monitoring services, which include predictive analytics, provide an alternative to large-scale freezer farms or capital-intensive cold rooms used in the manufacturing of drugs, vaccines, and other biological products. Forced air convection cooling in Farrar’s controlled rate chamber greatly reduces +40˚ to -80˚C (+104° to -112°F) freeze/thaw times from days or weeks to hours, optimizing manufacturing efficiency and improving characteristics such as uniformity and repeatability versus competing technologies."This collaboration is a win-win for the industry,” said Holly Paeper, president, Trane Technologies Life Science Solutions. “Farrar and Entegris solutions jointly represent a step forward in reliability, simplicity, and affordability for end-to-end bioprocessing. We’re excited to discover how we can jointly advance precision temperature technology that helps protect quality and optimizes manufacturing.” Entegris will showcase Farrar’s controlled rate chamber in our new Life Sciences Technology Center in Billerica, MA, which offers life sciences customers the opportunity to leverage our expertise in cold-chain challenges to reduce costs, increase speed to market, and optimize processes. This premier facility brings Entegris’ tools and technologies together in one place, where customers can test equipment for freeze/thaw processes to determine which products best fit their needs. As part of our solutions for manufacturing challenges, we now offer Aramus shaped 2D single-use bags with custom shapes, sizes, and assembly configurations for customers’ space and function requirements. They are resistant to extreme cold temperatures and withstand gamma sterilization, which makes them a preferred solution for freezing, transporting, storing, and thawing drug substances, like COVID-19 vaccines, cell therapies, and gene therapies. “Our new technology center enables our customers to really understand the whole freezing process and optimize it before setting up a new lab of their own,” said John Lynch, vice president, Entegris. “Together with Farrar we are able to provide novel and high-value options for bulk drug freezing.”

Entegris is proud to announce a new relationship with HOF Sonderanlagenbau GmbH, an international provider of freeze/thaw equipment and special solutions for the pharmaceutical and biotechnology sectors. Entegris offers the best-in-class Aramus™ bag for robust cold storage and transport. Collaborating with HOF enables Entegris to offer a combined solution for our customers that accelerate the freeze/thaw process and help showcase our new Life Sciences Technology Center, built to offer customers the opportunity to leverage our cold-chain supply expertise to optimize processes, reduce costs, and increase speed to market.

Fire and Smoke: Outdoor Air Quality and Your Fab

Summer is the perfect season to enjoy the great outdoors with friends and family. Unless, of course, the air is filled with smoke and ash. The color-coded air quality readings too often go beyond the red danger zone into purple, with an Air Quality Index (AQI) of over 200 parts per million (ppm) of particulate contamination. This particulate count is far above what is safe even for healthy adults. In many parts of the western U.S. and beyond, purple air has become far too familiar.